June 6, 2021 GOOD NEWS FOLKS PAUL SOON FINALLY WILL BE ABLE TO MOVE INTO HIS OWN REAL HOME. NO MORE TENT ! DON'T WORRY P4P IS GOING WITH HIM. SO ARE ALL HIS BELOVED CATS. HE WILL BE TURNING THE NEW PLACE INTO A CAT SANCTUARY. TO THIS END TO HELP WITH THE MOVE AND SANCTUARY SET UP HE HAS A "GO FUND ME" IF ANY WOULD BE ABLE AND WILLING TO CONTRIBUTE TO IT SOMETIME PLEASE ASK. ME PAM VIA EMAIL FOR THE GO FUND ME LINK .THE LINK CAN BE SHARED TOO ! NOTHING WILL HAPPEN INSTANTLY BUT I AM SURE YOU ALL WANT TO CHEER PAUL ON THAT FINALLY HE AND THE CATS WILL HAVE A SAFE HOME
New Topic
Followed Topics END_OF_DOCUMENT_TOKEN_TO_BE_REPLACED

The News Desk...Where we cover real and important news !

Hello everyfurs, welcome to the News Desk, the only place for real and important news!

I am Reporter Teddy and I willcover the news for you and bring you the big important stuff.

First news today. I will not be covering the Puppybowl this year because I have been bane from watching it by humans thinking I was maybe a little too much into it for the television's safety. We will have to see if we can find a Reporter who as seen it and can talk to you about the big event I didn't get to see..... *Give a look to Humandad*

The second story of the night come from Los Angeles, California.

Last week the humans of a neighbourhood of West Covina got woken by a gang terrorising them by walking all over the place and screaming at them, some gang members even did eat their plants. When the Police did show up they soon found the gang and were able to bring back the peace to the neighbourhood. Turn out it was about a dozen of sheeps and goats fallow their leader, a donkey, will he was exploring.

I did manage to talk to the donkey for you.

RT:Mr.Donkey, can you tell us what did happen that evening?

Donkey: Well, the humans we live with did forget to close the door so I decided to go out on a walk and see around.

RT: But you were not alone Mr.Donkey

Donkey:No I was not, those sheeps and goats are such annoying fallowers, no matter what you do or where you go they are there, fallowing like sheeps......

RT:I guess that is because they are!

Donkey: they are what?

Donkey:Yes, those are annoying fallowers you know, always in a gang right behind you.

RT:Right.....so you had nothing to do with them and the fact they were eating flowers?

Donkey: Nope, nothing, me, all I wanted was to visite the gardens and see if the grass was greener!

Donkey: The humans are always saying that but the grass is the same all over...until the sheeps and goats eat it!!!

Photographer Boris did send us a photo of the incident!

This as been the real news with Reporter Teddy, have a great evening everyfurs!

All the news that's fit to print...and eat!

Good evening everyfurs, welcome to another edition of the real news with Reporter Teddy!

Look like we have another donkey gangleader on the loose. This time the donkey did lead a group of horses out of their firld and into a residential area. The gang did walk onto gardens and leaf some smelling gifts behind them before the police was able to herd them back into a nearby field. From what I know the donkey is still on the loose and wanted by the police so keep your eyes open for that trouble maker. Here is his mugshot from a previous infraction. 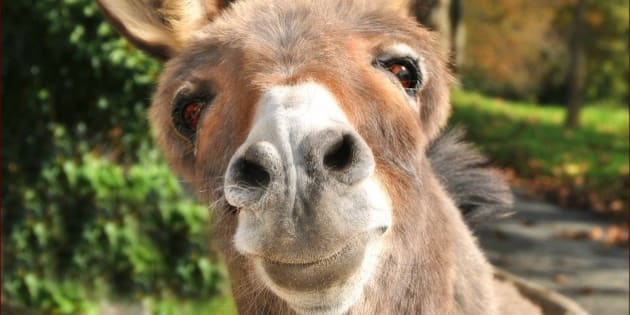 Last week cats from Tampico were feeling like they did win the lottery because it was raining fishes.

I did talk to a few cats earlier and they told me that it did start to rain but not only water was falling from the sky, the rain had small fishes in it and all the cats had to do was open their mouth toward the sky to catch the fishes.

I will now talk to a old wise cat who say he know what did happen!

WC:It was bad weather in the ocean that did cause a very strong watersprout that did suck up the small fishes and dumped them inland.

RT: Is it true that many younger cats don't agree with your explanation?

WC: That is true. A group of cats say it is the God of cats that as been giving them gifts. They don't believe in science .

WC: Yes but they think I made it all up.

That was Mr.Wise Cat. The leader of the other group of Cats didn't want to talk to you live but he told me that what Mr.Wise Cat was saying is a lie.

This as been today's News with Reporter Teddy! Have a great evening everyfurs!

Such a furbulous jobs of repurrting Teddy!  I's loves it's!

I's noticed that's in the 2 stories they's hads Donkey's as the ring leaders!

Such wonderpurr News Reports! This is news worths readings!

Yes.  THIS is the news everyfur needs to read.  Not that nonsense the hoomans print.

Now I sort of wish I lived closer to water so that I might get some free Sky Fish.

Oooh RT, I have soooooo missed your news stories!  And just think, you now have such a great photo journalist to assist!

Yaaaaaay....we have our names back!

RT, I will donate some breath mints to all the kitties that ate fish....they must have bad breath really bad!

Oh this is pawsome!  Can't wait for the next edition!

Good evening everyfurs, time for the news with Reporter Teddy!!!!

Last weekend there was a big 45 minutes standoff in a farm after the farmer called the police saying he saw a big and dangerous cat with stripe hanging in his barn. The police managed to get a look inside and they saw a Tiger. They did secure the barn to make sure the tiger was not going anywhere and they did some phone calls to find from where the tiger did escape. Not finding anything the special intervention team did make it's way fully armed into the barn and they did find the Tiger alright....

Turn out the big dangerous Tiger was only a stuffed toy!!!!!!! I would guess the farmer will have a eye exam pretty soon!!!!!

Tonight I would like to do a special spotlight on a special dog. Rambo the Golden Retriever from Northern Ireland.

Rambo is a dog who as learn how to drive a tractor to help his human around the farm, he plough fields, cute the grass, cut down corn and trim hedges.

People are so impress with his driving that they go to see him work and take pictures of him working .

Rambo say he like having people watching him work when they say he is such a good boy!!!!

This as been today's news with Reporter Teddy!

Have a great evening everyfurs!

Oh my catness!  Rambo is such a talented and special doggie!  I's fury impurressed and woulds loves to rides with him!

What a great prank!  I wish I had thought of it!

Oh Reporter Teddy....those were two great stories! Thank you!  I would love to take a ride with Rambo!

oh, Teddy, I love these stories SO much! Thank you for the laughs!!!!!

I'd like to haf da big stuffed Lion to sleep on. Meowmie says no dat da Big Teddy Bear (it's all white so no mistaking it fur a real one) is enough big animals.

I bet some of mew could use dat dog to help wif mewr yards and fields.

Members who likes this

Are you sure you want to perform this action?